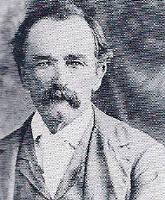 Special to The News.

RICE, Texas, Jan. 28.--Burwell Edmundson, oldest citizen of Rice and believed to be the oldest native Texan, observed his ninety-eighth birthday at his home in Rice Saturday. Better known as Uncle Burl, he was born near Huntsville. In 1854 he moved with his parents to Chatfield, Navarro County, then to Waxahachie in 1856, from there to Waco and later back to Chatfield.

In 1862 he enlisted in Waul's Legion of the Confederate army at Tehuacana, in Limestone County, and was transferred from there to Mississippi.

Benjamin F. Sterling, father of former Gov. Ross Sterling of Texas, was his commander during the Battle of Vicksburg. It required forty-eight days during 1863 for this legion to be captured by General Grant's army.

After being paroled at Vicksburg on July 10, Mr. Edmundson walked from there to his home at Chatfield, a distance of more than 400 miles.

He received his discharge at Galveston in 1865.

For several years after the war he was a cowboy, assisting in moving large herds of cattle hundreds of miles.

Despite his advanced years, Mr. Edmundson still enjoys average health. He has been a subscriber of The Dallas News for many years.