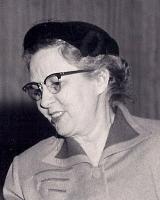 The following article, subtitled "(With apologies to Gramatky),"
is an informal biography of Kellie Loop
and was published in an employee newsletter
of the Dallas Public Library,
probably in the 1950s.
Obvious misspellings have been corrected.

A good many years ago, on a Friday in October, Dave and Fannie Loop welcomed into their home the first of their four daughters. They named her Kellie Elizabeth for their two sisters, and no little girl ever had two aunties more devoted to a namesake.

For five years Kellie was an only child, but her parents never spoiled her and never failed to punish when the occasion demanded. She still remembers the peach tree switches and the big orchard where they grew.

There are other memories of those early years - the feel of new tender grass on bare feet the first warm day in spring, the magic of the first sleepy-eyed doll, and the trips to Granny's in the surrey "with the fringe on the top."

Life was good in the small town of Rice where there was plenty of room to play and to ride the donkey or Shetland pony.

She started to school at the age of six and after the usual number of years walked out of Baylor College with a B. A. degree and a high school teacher's certificate. Through the years her father had tried to make a musician of her and her mother had insisted on elocution lessons, but no special talent seemed to develop, and when the College Placement Bureau said there was a school in Oklahoma that needed a French teacher, she took the job. On arriving there she was flabbergasted to learn that she would also have a class in Caesar, but, with the confidence of the inexperienced and the aid of a pony, she survived the ordeal and was even re-elected. She also taught in New Mexico before settling down in Texas to a teaching career that lasted many years.

During this time she studied at Columbia and the University of California, and usually had a nice trip during summer vacation.

When the gray hairs began to appear she decided she should be doing something "easier," and because library work had an appeal from the other side of the desk, she went to Peabody for a degree in Library Science.

In 1936 she came to the Dallas Public Library as an assistant in the Catalog Department. She has found the work interesting, if not "easy," and often wonders why she waited so long to change her profession.

Gardening is her hobby. About all she can do at present is collect garden books and work on her garden scrap book but when that retirement age comes around, she plans to go back to her home town and garden to her heart's content.